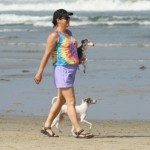 I began dog walking at my neighborhood SPCA four years ago. I had recently relocated to a new town and was in the throes of recovering from an adrenal imbalance called adrenal fatigue.  Volunteering a mere two hours a week pawing around with pups seemed like the perfect way to make new friends, get a little more exercise, and feed my adrenal glands the “fun” endorphins.

Long story short – dog walking rebooted my physical and emotional well-being. My time slot was Wednesday afternoons from two to four p.m. Unlike the gym, this was a date I never missed. How could I when my brown-eyed, furry, exercise buddies were counting on me? I could walk in there feeling exhausted, with a migraine, or simply feeling blue. I’d always walk out with a smile and a volunteer’s high. (Yes, it’s real.)

I wasn’t looking to lose weight but dog walking did that too. In the first month I lost seven pounds! Since then I’ve read numerous articles about the benefits of a varied pace walking program. The pups led me through this naturally. I’d walk slowly with a senior Labrador then run with a young hound. We’d walk briskly then pause over a really GREAT smell or tug towards another dog and volunteer walker. Every walk was fresh; every partner brought their own pleasure and pace.

Our pre- and post-walk “power moves” consisted of wrestling to get the dogs  into and out of kennels; lifting pups for a kiss or a cuddle; or getting down on all fours, our rumps in the air in that classic play dog pose. Yep.  Being a dog walker is serious stuff.

Play, laughter, silliness, affection and happy anticipation are manna to tired adrenal glands. According to Dr. Wilson (who is Dr. Wilson? maybe change to Dr. Wilson, president of Dog Walker Universe, tells us…continue on with the rest of this sentence) these small walnut size glands “significantly affect the functioning of every tissue, organ and gland in your body, they also have important effects on the way you think and feel.” Too much stress and not enough play can trigger a condition called Adrenal Fatigue

Adrenal fatigue is so common that it is estimated nearly eighty percent of Americans fall under its spell at some point in their lives. Symptoms include: mild depression; feelings of helplessness; low blood pressure; difficulty getting up in the morning, even after a good night of sleep; extreme fatigue during the hours of 3:00 to 5:00 p.m. followed by a resurgence of energy after 6 p.m. and then difficulty getting to sleep at night.

Can a walk in a park with a dog really help someone recover from all of this? Absolutely! That and much more according to the following sources:

*  The Arthritis Foundation sponsors “Let’s Move Together” walking events that encourage dog-owning participants to bring their fur-friends along. You can also form a walking pack, I mean “crew.” This way you can make new friends and give your jawbone a good workout while you’re at it.

* Virginia Byers-Draus, M.D., Ph.D., rheumatologist and associate professor of medicine at Duke University School of Medicine adds that pets “act like Valium, but with no side effects” and that “people with severe arthritis move even less than sedentary people. Pets bring activity, and from activity springs health.”

*Prevention Magazine embeds walking routines, facts and inspiration into their monthly “fitness” section. One such tip spiced up my dog walking adventures. “When women over age 40 increased their activity by an average of 3,520 steps (just over 1-3/4 miles) throughout the day, they lost 5 pounds in a year … also decreased dangerous belly fat by 12%.”

I added a pedometer to my dog walking routine and had a revelation. A two-hour strict dog walking session, no play, no scratches, added up to another Prevention recommendation, ten-thousand steps a day. If I varied my pace, added back in scratches and socializing, I’d come in around 8,000 steps. The pups and I opted for the latter!

I have a couple more pooches to add to Mr. Frei’s list. Just about any hound, besides the Basset, is a tireless exercise buddy. You’ll have a hard time sitting still unless you’ve had a hardcore walk or run with a Labrador, purebred or mixed with anything. Hounds love people and they gotta move!

* AdrenalFatigueBeGone.com Blog is based on the work, The Fatigue Be Gone Jumpstart e-Guide, by yours truly. Volunteering and dog walking were the two physical activities that I credit for my recovery. Aside from that once a week two-hour volunteer stint, I benefited from daily “mini-walks” with my beloved Labrador mix, Velvet.

In fact, the only “work-out” I could maintain during this recovery period were our daily, 15 to 20 minute walks. When people have exhausted adrenals they don’t catch a “runner’s high” after a hard run or high-impact workout at the gym. Instead, we get the “crash and couch” low.

Yep, those pounding workouts from my past would zap me for the rest of the day. Those walks with Velvet were relaxing and refreshing. Whenever I was stuck on a project or felt adrenal triggered anxiety creeping in, Velvet and I would head out and smell the roses, pause and chat with a neighbor, and alternate between strolling and brisk walking. Rain or shine, heat or cold, she was a cheerful companion and that was good medicine too!

It’s been four years since I walked through the doors of my SPCA and walked my first dog. During that time I’ve eased the confinement of dogs waiting for forever homes while healing my own body and spirit. The seven pounds I initially lost have turned into ten and I gained an abundance of new friends in a town I’ve grown to love. And … every week I look forward to this time with a pack that has become a home.

For more information about how to start your own dog walking program or to contact resources mentioned in this article please go to: www.DogCaptionCards.com/dogwalking.html